on mindfulness: the breath is your friend

I’ve been practising mindfulness meditation in various forms for over 7 years, but in the past few months it’s become much more of a central feature in my work and PhD research.

It’s like all roads are leading in this direction, wherever I look, there it is…

So this post brings together a summary of key findings from mindfulness research that I’ve come across to date.

Mindfulness is often described as the intentional cultivation of moment-to-moment awareness of what is going on within and around you, without judgement or distortion. You are not dwelling on what was, or could have been, or might be, but are fully awake to being in the present moment, to the reality of your direct experience.

Almost everyone has the capacity to attend and be aware – but this capacity within a person can be sharpened or dulled by a variety of factors. People differ in their propensity or willingness to be aware and sustain attention to what is occurring in the present [1].

So some people have a greater dispositional tendency for mindfulness than others, but mindfulness can be developed through practice.

The practice is both formal (e.g. a 30 min meditation) and informal (incorporating mindfulness into everyday activities such as eating or brushing your teeth). It can be done sitting or lying down, or with movement as in yoga or tai chi. The formal practice includes focussing awareness and attention to the breath, to different parts of the body (known as the ‘body scan’), and to the five senses. Sessions may be guided or silent.

The non-judgemental aspect of mindfulness is crucial. As the mind wanders (as minds do), you have thoughts and feelings. When you become aware of these, you accept the reality of it and gently escort your attention back to the breath or whatever you were focussing on in the practice. The breath is the anchor  – it is the thing you can always come back to, breathing in and out is always happening.

Other attitudinal foundations are: patience, beginner’s mind, trust, non-striving, acceptance, letting go [2] and kindness. There is nowhere to get to in mindfulness meditation, nothing to be achieved. The practice is about allowing things to be just as they are.

In being an impartial witness to our experience in each moment, if you can stay with it long enough you see how it dissolves or changes into something else.

The formal meditation practice trains the practitioner in achieving a degree of detachment from immediate automatic reaction to stimuli. Feelings, thoughts and body sensations are accepted for what they are without judgement, filtering or censorship. They are recognised as passing phenomena – they are not ‘me’, allowing the practitioner to then decide what to do with them. Mindfulness is associated with increased choicefulness in behaviour.

Research in medicine and physical and mental health [2] care finds benefits of regular mindfulness practice in:

Research on mindfulness in the workplace [3] finds benefits in:

Research on mindfulness in schools [4] finds increases in children’s:

Research in social psychology [5] finds that practitioners have more:

Mindfulness practice affects how we perceive ourselves – our values, virtues and limitations – and our interdependencies with our environment, including the way we perceive the impact of our decisions and actions [6]. Neuroplasticity is the brain’s ability to re-design itself. It seems that mindfulness practice alters the physical structure of the brain:

Mindfulness practitioners tend to approach rather than avoid experiences: they are more open and accepting [7]. Social neuroscience research shows that the overarching organising principle of the brain is to minimize threat and maximise reward, and it seems our brains are more tuned to threats than rewards. So we respond to experiences with either an approach or avoid response [8]. The limbic system processes stimuli before it reaches our conscious awareness. The brain sends us a desire or urge to act about half a second before acting. It is in the last 0.2 seconds that we have ‘veto power’ over which thoughts we act upon [9]. Mindfulness brings greater awareness to this split second moment – so we have greater choice in how to respond. It may be that a threat response is appropriate, but we do this mindfully rather than automatically.

Brown & Kasser (2005) propose that mindful awareness of feedback messages regarding environmental impact is a precondition for conscious guidance of consumption behaviour. Their research finds mindfulness to be associated with lower materialism and less consumption (i.e. spending) over time and with empathy for others . Mark Williams from Oxford University Mindfulness Centre states that with regular meditation the insula becomes more active, “This part of the brain is integral to our sense of human connectedness as it gives us access to those body sensations that help to mediate empathy in a very real and visceral way” [10].

The 15-item Mindful Awareness Attention Scale (MAAS) assesses dispositional mindfulness in everyday experience, specifically open or receptive awareness of and attention to what is taking place in the present (Brown & Ryan 2003). As a uni-dimensional instrument it yields a single total score. 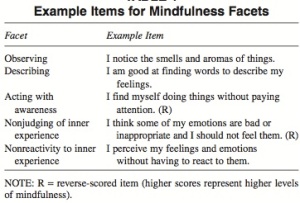 The 30-item Freiburg Mindfulness Inventory (FMI) is another self-report multi-dimensional instrument, with a shorter 14-item version (Walach et al 2006). It was developed to be used with Buddhist meditators.

There is also the Kentucky Inventory of Mindfulness Skills (KIMS) based largely on dialectical behavioural therapy (DBT) in which mindfulness is conceptualised as a set of interrelated skills (Baer et al 2004).

There are similarities and also differences between these concepts.

Mindfulness operates on rather than within thoughts and feelings, which is what happens when we reflect.

Mindfulness in my work and research

In terms of my Phd research, I’m most interested in the links between mindfulness and ecologically responsible behaviour.

I lead mindfulness meditation sessions with individuals, groups and organisations, most recently with Arts Council England staff in Manchester. I am training in Mindfulness Based Cognitive Coaching and doing Mindfulness-Based Teacher Training Course Level 1 with Bangor University Centre for Mindfulness Research and Practice.

3 Responses to on mindfulness: the breath is your friend